Assault of Amy Ndiaye Gniby in the Parliament: Her Lawyer Went to the Public Prosecutor - Lequotidien 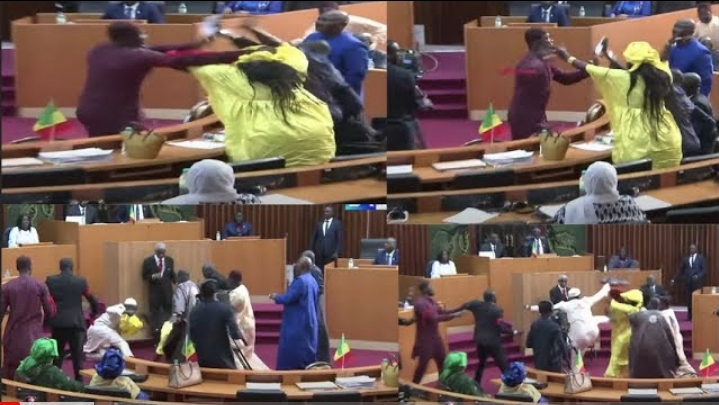 The case of the assault of Bby MP, Amy Ndiaye Gniby, reached a new level yesterday. The parliamentarian’s lawyer decided to take legal action against the two MPs who are members of the Yewwi askan wi (Yaw) parliamentary group, the alleged perpetrators of the alleged offences: Massata Samb and Mamadou Niang.

Yesterday, Baboucar Cissé filed a complaint at the Public Prosecutor’s Office in the High Court of Dakar for « assault and battery », but also for « criminal association » against the MPs accused of having attacked, this Thursday in the Hemicycle, the deputy mayor of Gniby, a commune in the department of Kaffrine.

Speaking on the airwaves of the Rfm after filing the complaint, Lawyer Baboucar Cissé said he « personally met the prosecutor of the Republic » to whom he said to have « handed the complaint ». Before adding: « The prosecutor told me that he will transmit the complaint to the level of the Dic. It is already an offence of assault and battery and then I added the criminal association, because the attack was in order, that is to say there was agreement, at the limit, a consultation between the two aggressors. » « It’s true, the president of the National Assembly filed a complaint. This is normal, but Amy Ndiaye is the victim and the law allows victims of crime to file a complaint. We are the ones who were attacked. So, it is necessary for my client to file a complaint as well,  » said the counsel of Ms Amy Ndiaye Gniby.

Referring to the health status of his client, Lawyer Cissé maintained that it « has still not improved », especially since the MP assaulted « is still in a bad state ». « Even worse, there is this risk of post-traumatic abortion. We pray that she does not lose her pregnancy, because otherwise the offences committed by her attackers will take another turn. We will no longer speak of a crime, but rather of a criminal act, » the lawyer noted.

Until yesterday, MPs Massata Samb and Mamadou Niang of the Yaw parliamentary group and members of the Pur were actively sought by the security forces, on the orders of the public prosecutor, Amady Diouf. This is after the President of the National Assembly, Amadou Mame Diop, seized the Public Prosecutor’s Office on the minutes of the session, in conformity with the Rules of Procedure of the National Assembly in its article 53 paragraph 3.

In fact, the National Assembly was indeed upside down on Thursday. The cause: the assault of MP Amy Ndiaye Gniby of Bby by two MPs from Yaw: Massata Samb and Mamadou Niang. « An MP recently said discourteous remarks about a marabout, » he reminded President Amadou Mame Diop. Amy Ndiaye Gniby, author of the remarks, then replied from her seat that she did not care. Massata Samb immediately cut short his speech, rushed towards her and slapped her. It was one act too many. After this slap, the MP receives a blow to the stomach from parliamentarian Mamadou Niang. And the latter collapse before fainting. Ms Ndiaye was then evacuated to Dakar’s Principal Hospital for first aid. As Ms Ndiaye is more than two months pregnant, this act takes an even more dramatic turn.

Related Topics:
Up Next